From Santa To SextingÂ  | Â Brenda Hunter and Kristen BlairÂ 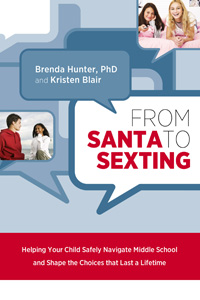 I do part ways with the authors on their position regarding technology and social media. They pretty much purport that children should not have cell phones or access to social media until high school. While I believe in moderation of media consumption, including TV and video games, I don’t lean as far towards limitation as they do (this could be because I’m a bit of a techno-geek and and user of social media.) I do agree there are dangers and that as parents it’s imperitave we’re incredibly involved with our children’s use of technology and their online experience. I don’t necessarily agree that we need to keep our children away from these things for fear that theyÂ mightÂ encounter something bad.

Publishers Info:
It’s a rough, tough world for middle schoolers today. Yet the decisions they face are pivotal, affecting the whole of life.Â FROM SANTA TO SEXTINGÂ discusses the myriad pressures middle schoolers face and empowers parents to guide and protect their children during these important years.

*I was given this book to review byÂ ACU Press/Leafwood Publishers. The opinions in this review are mine alone and are not the opinions of the publisher.